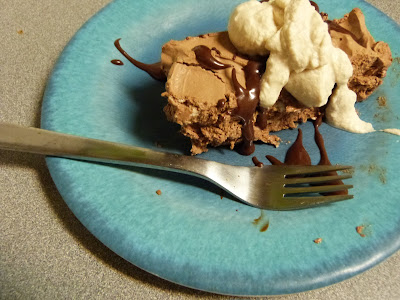 I've learned soooo much about cooking, baking, how to avoid 3rd degree burns, etc in the past couple years. I feel like I "know what I'm doing" much more now than ever before (despite the fact that I have a fresh scar on my bicep from a cookie sheet..!?).

But I remember cooking back before I technically "knew how" and it's weird, but I was so much more confident.

Ok sure, there was the time I made stew and didn't peel the carrots. And yea, there was the time I burnt everything I was making (that was more than one time). The time I ruined a sauce pot making rice. The time I dumped baking soda into my flour container (ok, that was yesterday). But I think the point is that despite the mistakes, I had more confidence then, than I do now.

Why, you might ask? I think it's because now I know that things are difficult. I had no idea that there were so many ways to screw things up.

I made a pie crust in college using a container of Pam spray for a rolling pin.. AND IT WAS FLAKY! I made a lemon meringue pie at age ~12 for Easter... AND THE MERINGUE DIDN'T RECEDE FROM THE PIE CRUST. I made soo many muffins as a kid that, in retrospect, I know I stirred 12,0000+ times, but they were still good. You get my point.

Now that I know the proper way to do things, it just seems harder. Now that I know it's supposed to be difficult, it is! I have become the "omgosh that looks hard" self fulfilling prophecy of baked goods.

So, ladies and gents... this is why I'm going to preface this recipe with... the opposite of a warning. This recipe is SO godamn easy; please don't make it hard. It looks hard. It sounds hard. What if my egg whites don't whip to stiff peaks? What if I over whip them? Did I heat them to the right temp? The chocolate could seize! What if I stir the custard too many times! 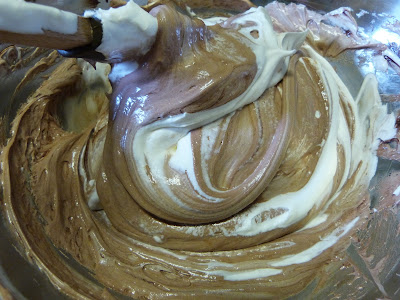 I think that's the key to semifreddo (a semi-frozen custard with a mousse-like texture). It sounds like there are a lot of steps, but this took me under 10 minutes. Just chill out. Heat the eggs, kill that bacteria, and then just whip 'em. Do your best to get stiff peaks, but I think under-whipping is better than over whipping. Melt your chocolate however you want. I've only ever had chocolate seize on me once and it was white chocolate, so it doesn't count. And then when you fold everything together, just keep in mind that it's ok if it's not totally uniform. If you see a little white in your finished product, that's how you know it's homemade. If it's a little flat, next time stir a few less times, but again try to err in favor of not fully mixing rather than over mixing. And you know what, just enjoy yourself.

"Special" Equipment:
2 medium heat-proof bowls (but if you only have one, you could heat your egg whites, then transfer them to another bowl to whip, clean the original bowl and reuse OR honestly I'm sure you could melt the chocolate in the microwave, but I did not test this)

To make the semifreddo:

Spray a loaf pan with nonstick cooking spray. Line with plastic wrap, leaving a 2" overhang and set aside.

Fill the bottom of a medium saucepan or saute pan with water and bring to a slow boil (you are created a double boil). In a medium heat-proof bowl, whisk together the egg whites and sugar. Set this over the boiling water and, whisking continually, heat the egg whites until warm. This could take from 2-5 minutes, just keep checking. Remove from heat.

Using an electric mixer, beat on medium-high speed until whites have tripled in volume and stiff peaks form when you remove the mixer. Set this aside.

In a third bowl, beat the cream until medium-stiff peaks form.

Using a rubber spatula, gently fold egg whites into warm chocolate. Then, fold in the whipped cream. Fold gently (the goal is to not lose all the air in the eggs and cream) and in as few strokes as possible until mixed. Scrape semifreddo into the prepared pan and smooth out the top. Cover tightly and freeze until firm, 3-4 hours. This will keep in the freezer up to a week.

Place chocolate in a medium heatproof bowl and set aside.

Bring the milk back to a boil. Gradually pour milk mixture over chocolate, continuously stirring until melted and smooth. Stir in tequila, vanilla and corn starch. Return to the saucepan and heat, stirring continuously, until sauce thickens. (Watch this closely, it will thicken quickly and if not continuously stirred will burn to the pan.)

This will keep in the refrigerator for a week. Reheat before use.

Uncover semifreddo and invert onto a platter (or if not serving all pieces at once, you can cut slices from the pan as needed). Using a knife dipped in hot water and wiped dry, cut semifreddo into slices and transfer to plates. Garnish with cinnamon whipped cream and warm spicy chocolate sauce. 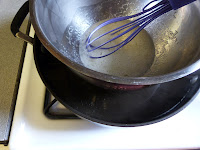 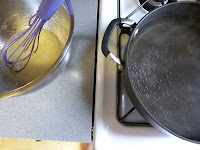 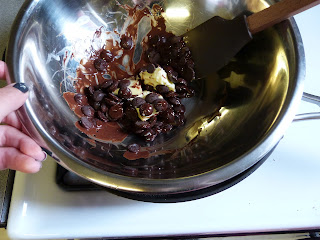 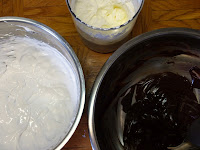 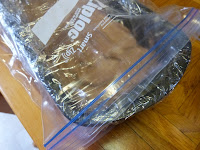 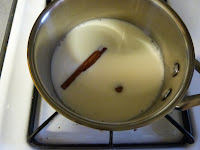 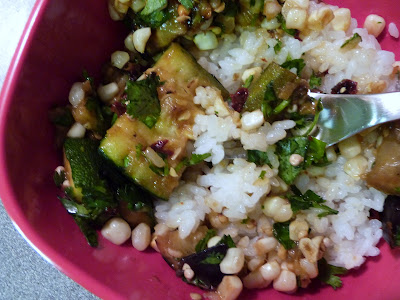 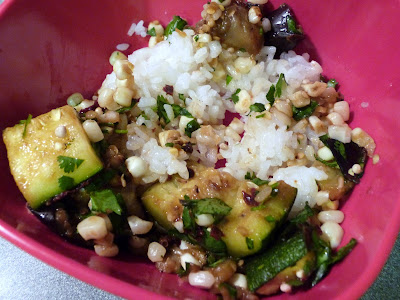 I can't even pretend to have not noticed, so I'll just be upfront: fish sauce is gross. Like.. gross gross.

Like, when you open the bottle you instantly release a pungent aroma slightly reminiscent of putrid milk and gym socks. That kind of gross.

Like, I was too afraid to taste it on its own, so I used exactly the amount required for this recipe and mixed the whole dressing before I dared to taste. I still have no idea what it tastes like. That kind of gross.

Like, when you spill a little on your chest (yea, I don't know.. don't ask me how that happened) and then wipe it off, it will still smell funky for hours (too close to your nose for comfort). That kind of gross. 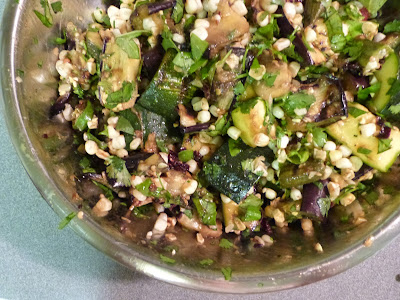 And trust me, I was really worried about this dish once I opened that bottle. I thought for sure it was going to be a flop. I was pretty confident that I was about to make the dressing, hate it and then improvise a new one. I lacked confidence.

But, damn this was good. So please, don't live in fear of fish sauce. Just be sure not to get too close, don't let anyone else smell it, put the cap back on tightly and hide it in the back of your pantry.

Build a medium-hot fire in a charcoal grill, or heat a gas grill to high. Brush grill grates with oil. Lay okra, corn, zucchini, chiles, eggplant out on a baking sheet. Using a basting brush, apply a light coating of oil to the vegetables, then lightly salt. Grill vegetables, turning every 2 minutes, until crisp-tender and lightly charred (total time is about 8 minutes).

Remove the corn kernels from their cobs and place in a large bowl. Cut the zucchini and eggplant into irregular 1" pieces and place in bowl with corn. Trim the tops from okra and cut into small tubes (about 2 cuts per orka pod) and add to bowl. Set aside.

Combine in the bowl of a food processor or small chopper the garlic, brown sugar, fish sauce, lime juice and chiles. Process until pureed.

Drizzle dressing over warm vegetables. Toss in the herbs until thoroughly combined.

Scoop steamed sushi rice onto a platter and top with salad. Either serve in this manner over the sushi rice, or toss together until combined. 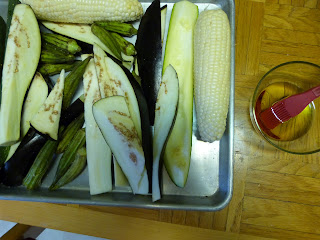 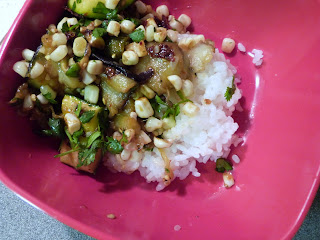 Posted by NutMeg at 2:22 PM No comments:

Ketchup packets are on my list of the worst things ever. I've never actually made that list, because I feel it would be largely depressing and I find it unnecessary to subject myself to that kind of torture, but if I did ketchup packets would be on there. Right next to computer mouses (mice?) with no scroll-y thing in the center. 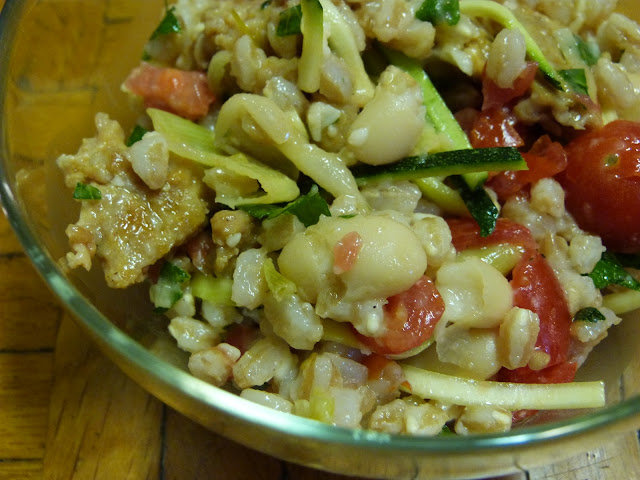 Packets deter from maximum ketchup usage. How many packets can a person really open in one sitting without feeling awkward (or getting tired?)? You can't even really use the whole packet because the ketchup won't come out. And forget using them in the car.

But last night, I found the coolest thing to happen to the world since ketchup was invented (which, interestingly enough, was a lot longer ago than one might have thought). The dip and squeeze packet.

And apparently I'm behind the times. These delightful little packets have been around for quite some time now. Dear Heinz, Thank you. I love you.

Hey! I just met you, and this is crazy, but here's a delicious salad. So make it, maybe?
(I'm sorry) 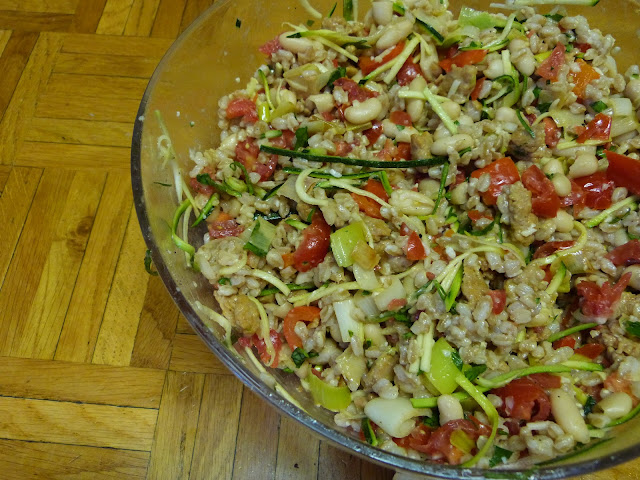 If it means anything, this farro salad was devoured by everyone I live with. We all loved it, a lot. It's easy and highlights basic, simple and tasty Italian flavors.So you really should try it. Farro is a little more expensive, but as the heart and soul of this dish, trust me it's worth it.

Note: To dice grape tomatoes, add in small batches to a food processor or chopper and pulse until just diced, but not pureed. Drain liquid before adding to recipe. 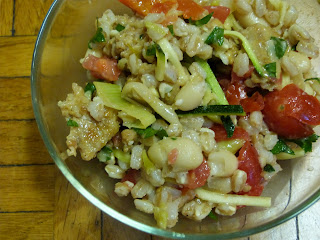 Soundtrack: Can you hear me now?


Cook farro according to package directions (mine took 35 minutes, so start this first).


In a large pan, heat EVOO over low heat. Add bell pepper, leeks and garlic. Saute over low for 10-15 minutes, or until leeks are softened. Remove to a bowl and set aside.


Wipe pan clean with a wet paper towel (careful!) and warm again over medium-low heat. Add sausage and brown, breaking apart with the side of your utensil and stirring frequently. Remove from heat once meat is thoroughly browned.


Combine in a large bowl the sauteed vegetables, Italian sausage, tomatoes, cannelloni beans, zucchini, parsley, basil and cheese. Toss together until combined. Add farro and season with salt and pepper to taste. 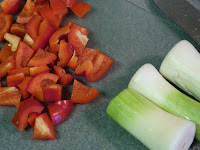 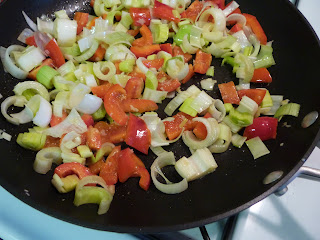 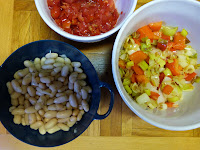 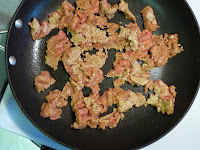