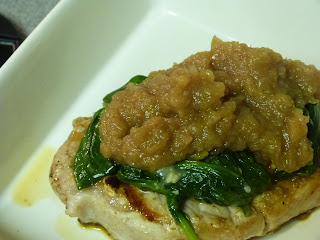 That... and.. I woke up this morning... and I can breathe! With the help of some Sudafed of course, but all that you need to know is that my nose  functioning and life is good!

And last time I posted, I totally felt like this:

I've been on a steady regime of Sudafed, soup (Adam totally rules and got me two orders of spicy shrimp and turnip noodle soup from David's in Chinatown which cleared my sinuses for a bit), cough drops, Theraflu and tea. And Honey Bunches of Oats. But I think the trick is definitely the Vitamin C pills that I've been taking 4/day (2 in the AM and 2 in the PM). That totally works. (Superstition?)

It's amazing how much we take breathing for granted.

Anyway, eating this pork chop tonight and being able to taste it was pretty awesome. So enough about me being sick. Let's get excited about grilled pork chops with caramelized onion apple sauce. 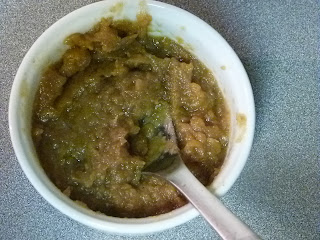 The thing about making applesauce is that you can make a lot. You don't have to spend a ton of time on this. You've just got to core the apples (Yea, you heard me. Don't peel them.). And cut them up. Boil them with some water and spices for a long time. And you're good to go. The boiling takes a while though. Caramelized onions can take some time too. So to make this a SUPER quick and delicious meal, I suggest making a batch of the applesauce on a weekend. You can divide it up and freeze the extra (individually depending on the number of chops you will serve it on) for later use (oh, how domestic of you!). Then, of course, it's just defrost and place on top of a grilled chop with some spinach!


So I'm going to give you this recipe as 2 different recipes. And the applesauce is going to make a lot. But you'll thank me later. And once again after that.


Combine apples, water, sugar and cinnamon in a quart saucepan over medium heat. Cover and cook for 20 minutes. Add onions and puree using an immersion blender (or wait until sauce cools and pulse in a blender or food processor).


Salt and pepper both sides of each pork chop. Place a grill pan over medium heat and heat until hot. Spray pan with cooking spray and place chops in pan. These will cook 7-10 minutes on each side until done.


Serve each pork chop topped with 1/4 of the spinach and 1/4 c of caramelized onion applesauce. 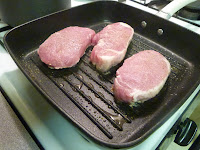 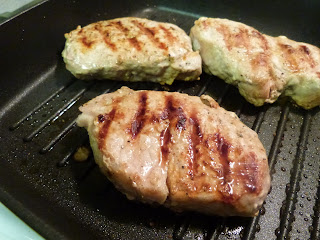 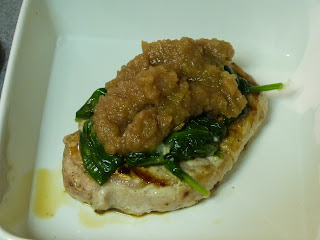